Some time ago, we have written about Satori botnet fingerprinting. Right there, we have fingerprinted more than half a million infected machines. However, Satori's C2 was quickly sinkholed by the security community. Not so long ago, 360Netlab informed the world about Satori.Coin.Robber variant, which is robbing ETH BitCoins by exploiting Claymore Miner software. This particular variant was performing scanning activities on ports 37215, 52869 and 3333. It was also possible to notice some scans on port 81, because Satori was exploiting IP cameras. On 10.02.2018, 360Netlab informed via twitter (here and here) about a new Satori variant, which is exploiting Dasan Routing devices via port 8080. Let us look into some details concerning Satori.Dasan, which were provided by 360Netlab and Radware. First of all, it is trying to exploit CVE-2017-18046 and perform a remote command execution by a buffer overflow. Bots are looking for vulnerable Dasan devices with port 8080 opened. However, they are not performing any exploitation actions. This botnet has a central exploitation server, which is responsible for the infections (185.62.188.88). This IP address can be derived from the TXT record of f.rippr.me hostname. 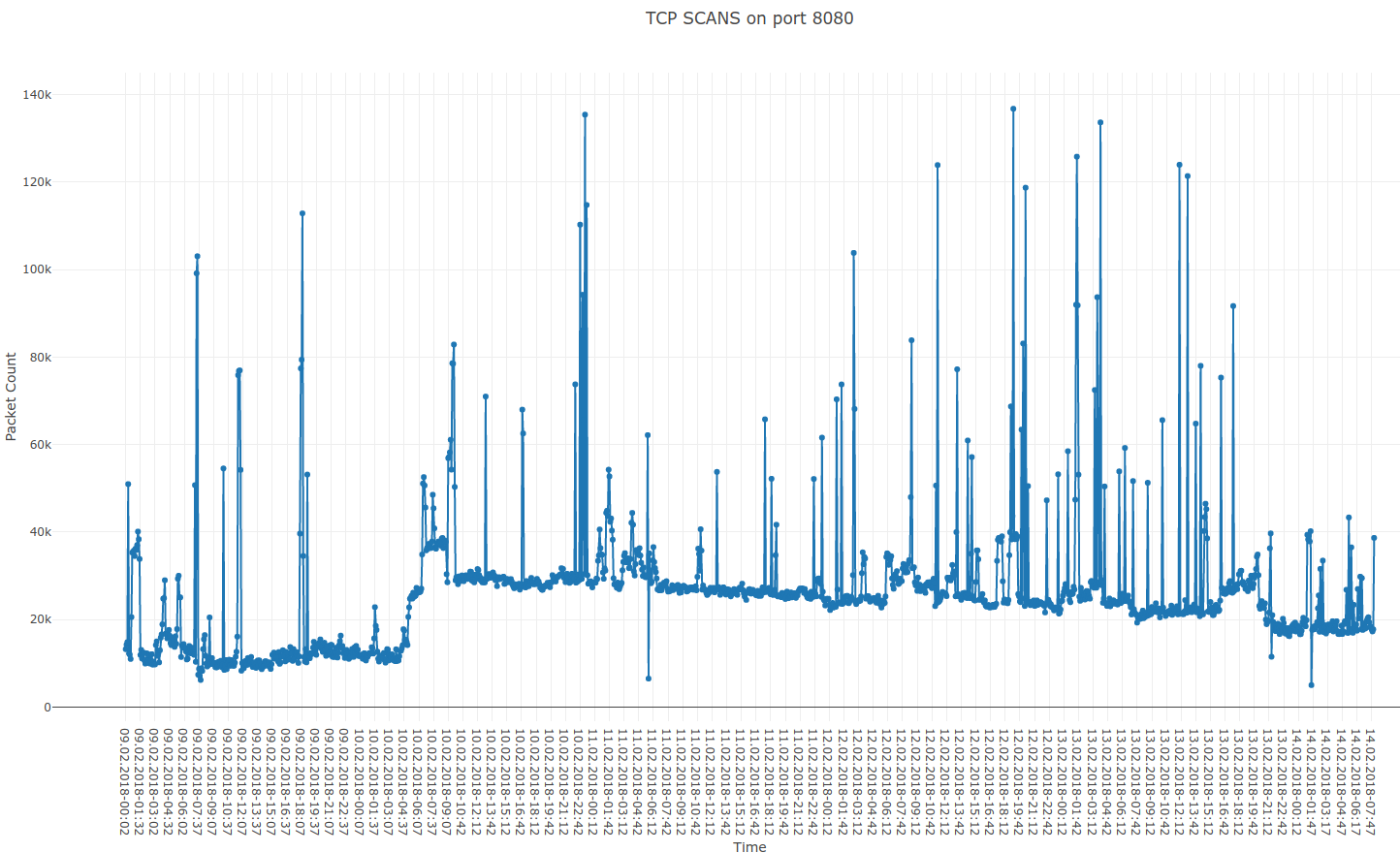 Here is an interesting part. Variant described in the previous blog post was scanning ports 23 and 2323 with Mirai signature. However, for the more interesting scanning on port 37215 and 52869 we have found no signatures. This has changed - nowadays almost every port targeted by Satori is using Mirai signature (TCP SEQUENCE NUMBER = IP DESTINATION), whether it is port 3333, 8080, 37215 or 52869. Probably, this behavior can be connected with the centralized exploitation server. As bots are not responsible for the exploitation themselves, they are probably just using Mirai code for efficiency.

According to this, we were looking for the IP addresses that were scanning port 8080 (only this port) with a Mirai signature.

Firstly, let us take a look into the number of total unique source IP addresses. We have noticed 45,393 different IP addresses in total. The biggest number of addresses was noticed in Vietnam, Korea, China, Thailand and Japan. 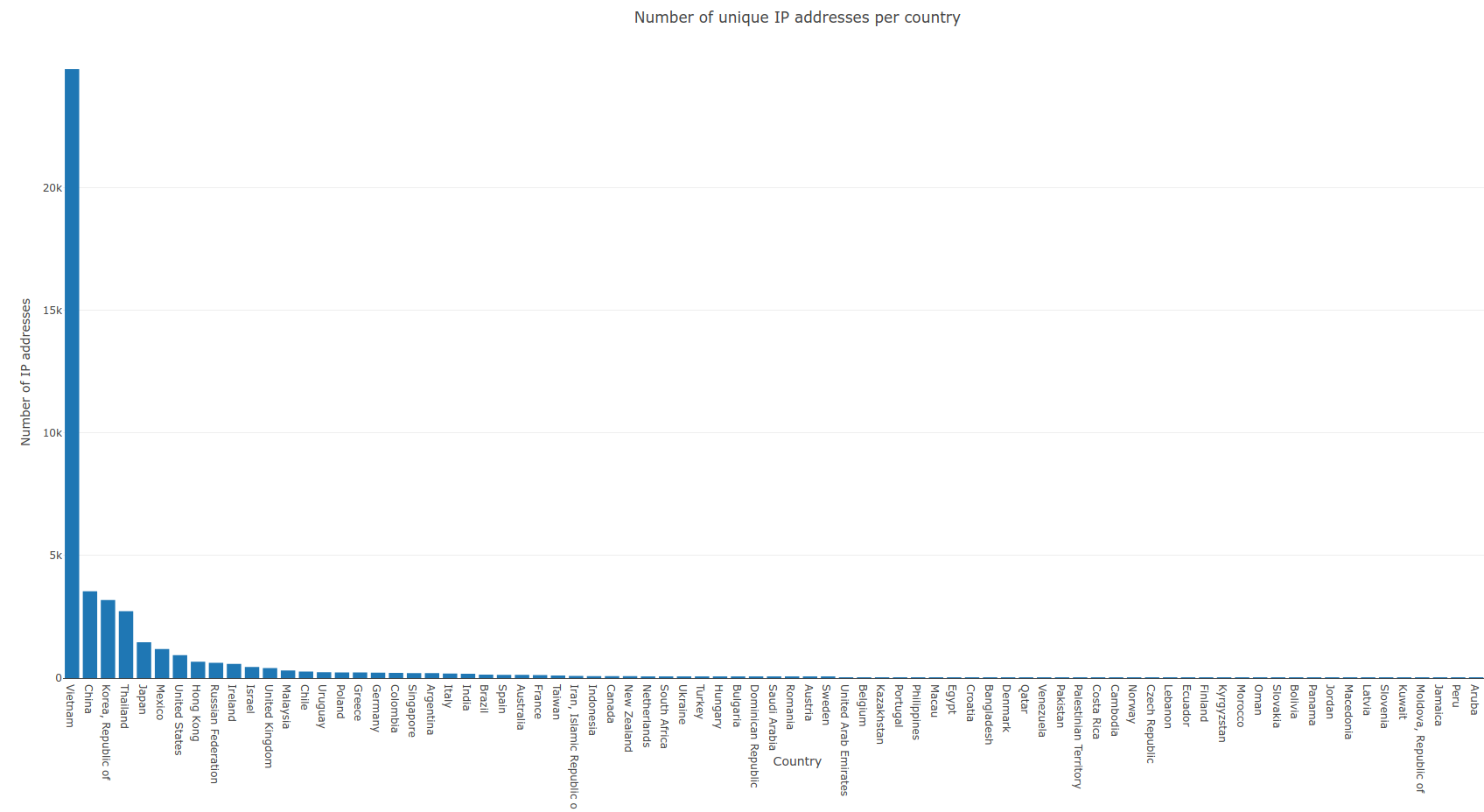 Possible vulnerable devices can be found in Shodan, using the following filter: “DasanNetwork Solution”. However, probably not all of these devices are vulnerable, because there are significant differences between number of devices listed by Shodan and number of devices fingerprinted in darknet. Moreover, number of devices found in Shodan is still getting lower. On 12.02.2018 there were more than 40,000 devices, on 14.02.2018 there were about 38,500 devices and on 15.02.2018 Shodan found only 36,900 devices. Of course we have to remember about DHCP and NAT, so the following chart has an illustrative character only, as it covers almost 4.5 days. 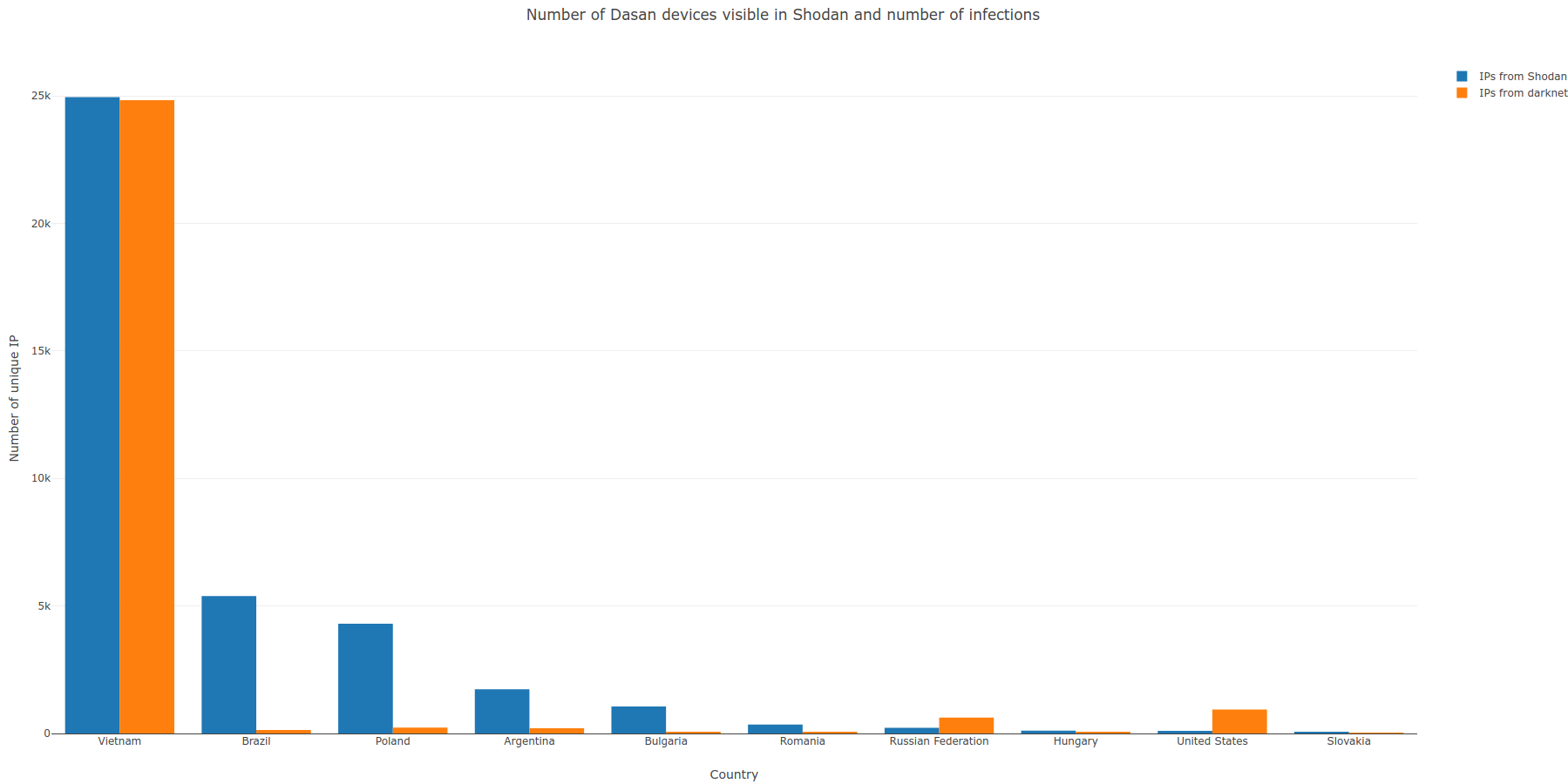 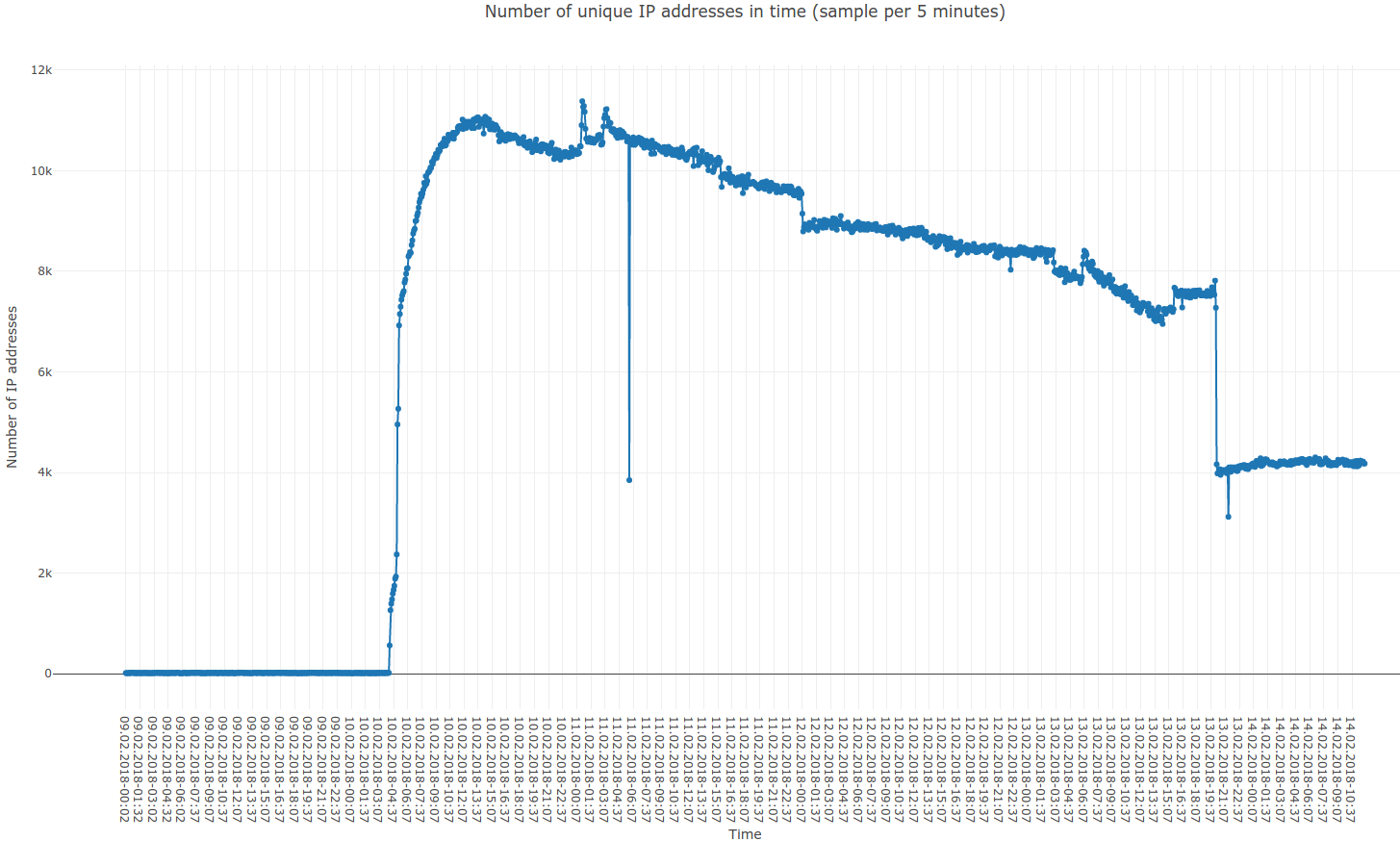 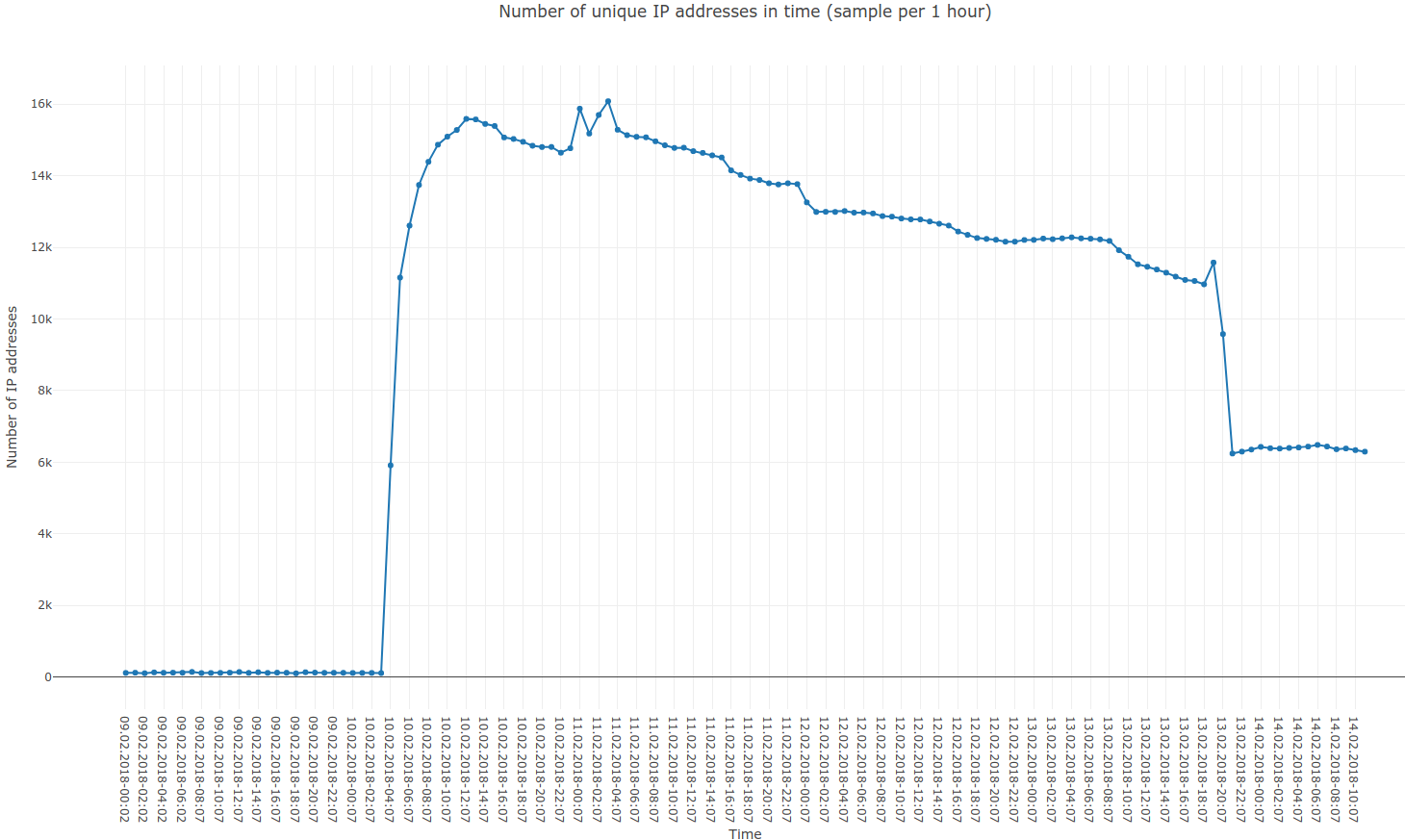 Now, let's have a look at the source ports. Their distribution seems quite normal, despite two suspiciously looking ports: 1026 and 1027. Here is an interesting part: we have fingerprinted about 1,000 unique IP addresses that were using these source ports and almost all of them were located in Vietnam (plus about 10 IP adresses in China). 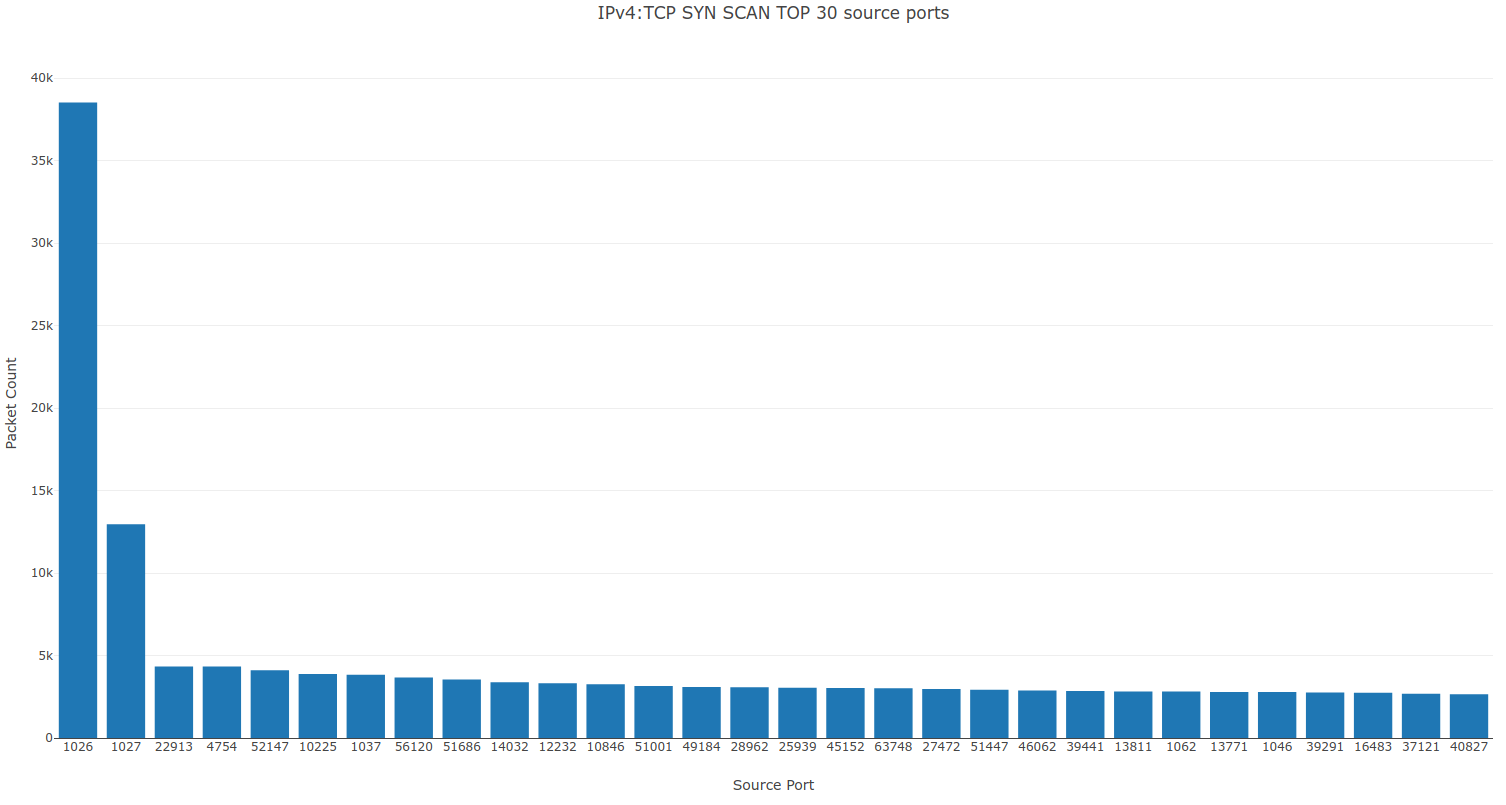 In the last step, we have checked the daily number of unique IP addresses, for four days when Satori.Dasan was most active. 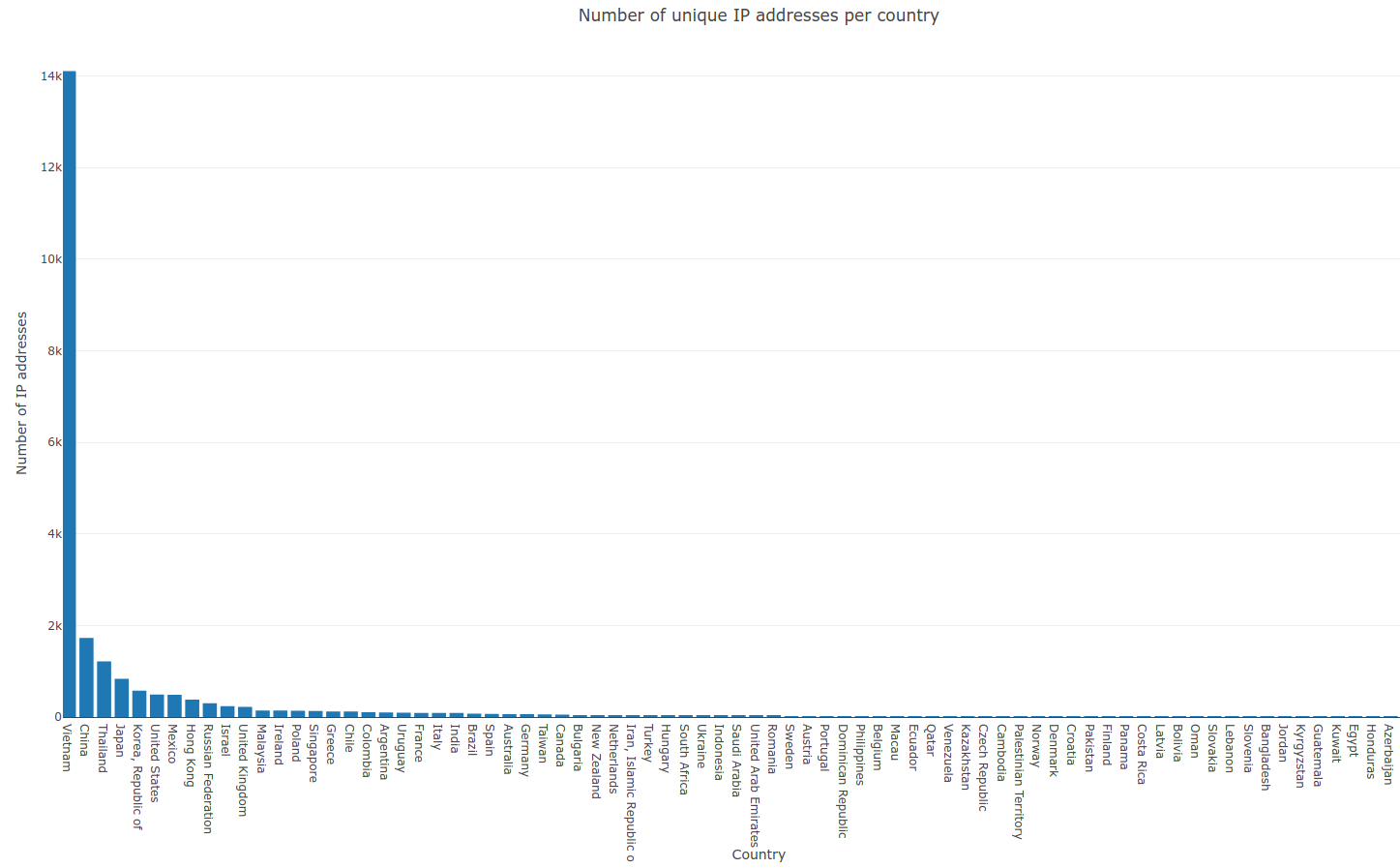 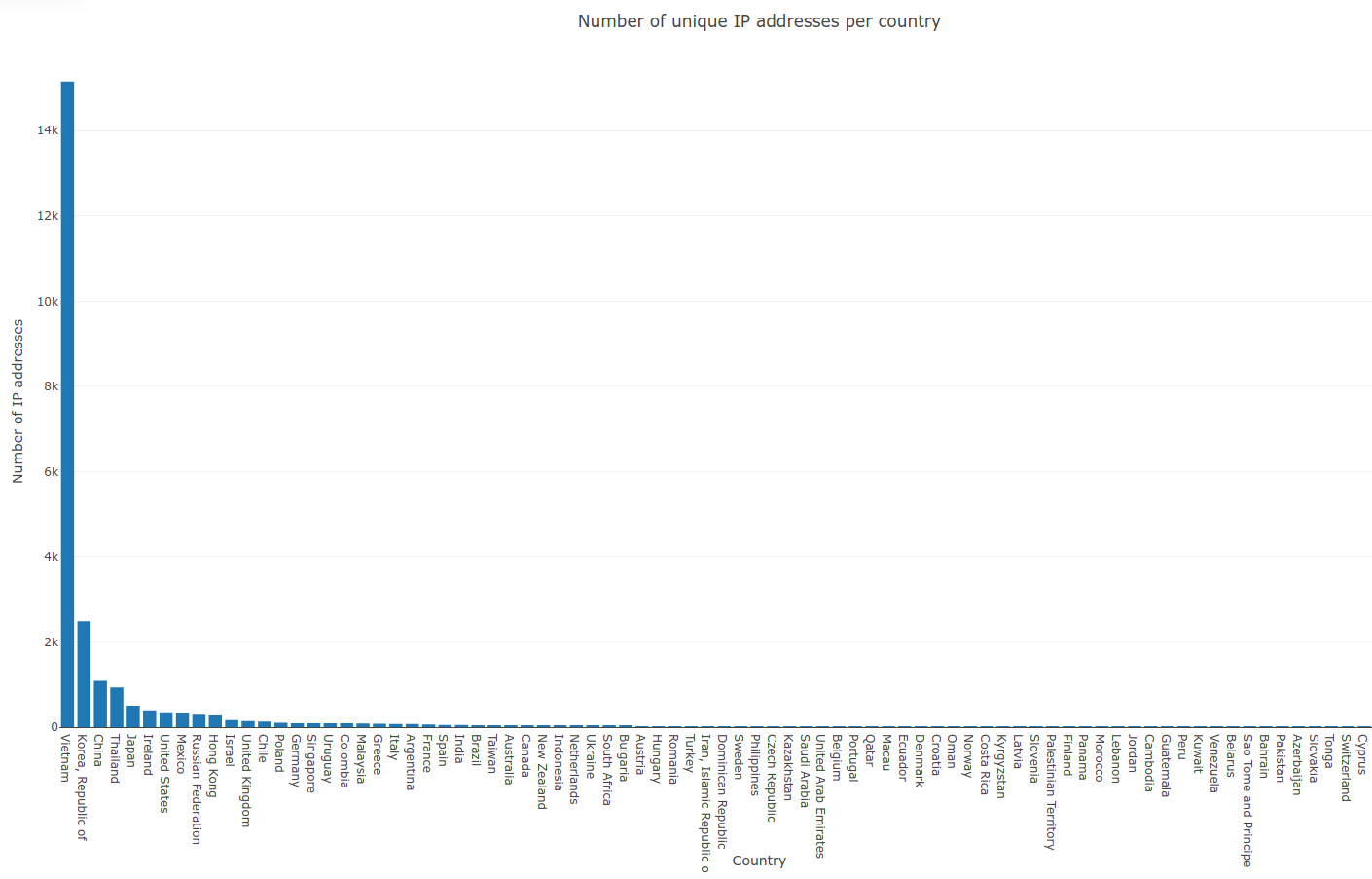 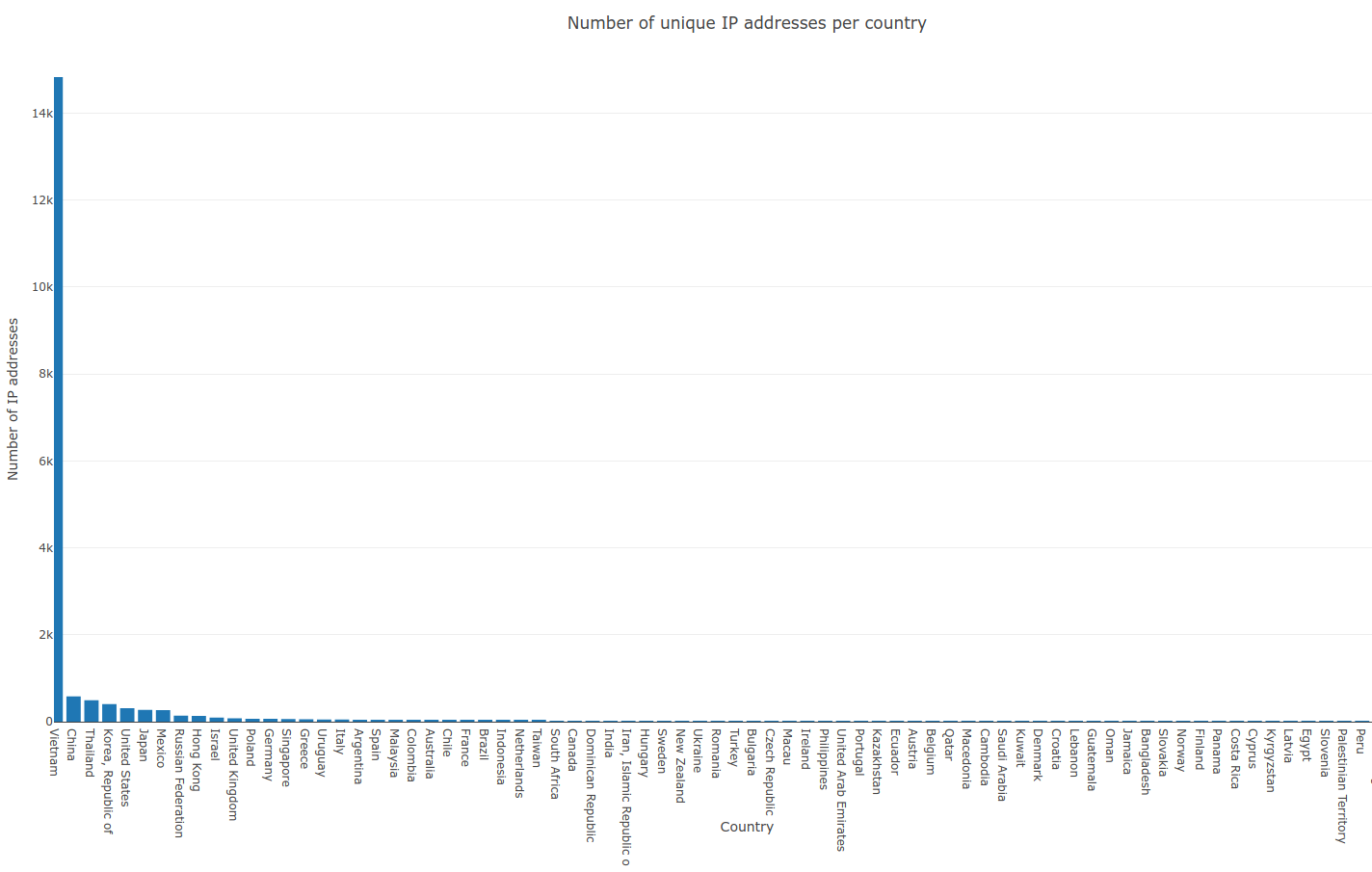 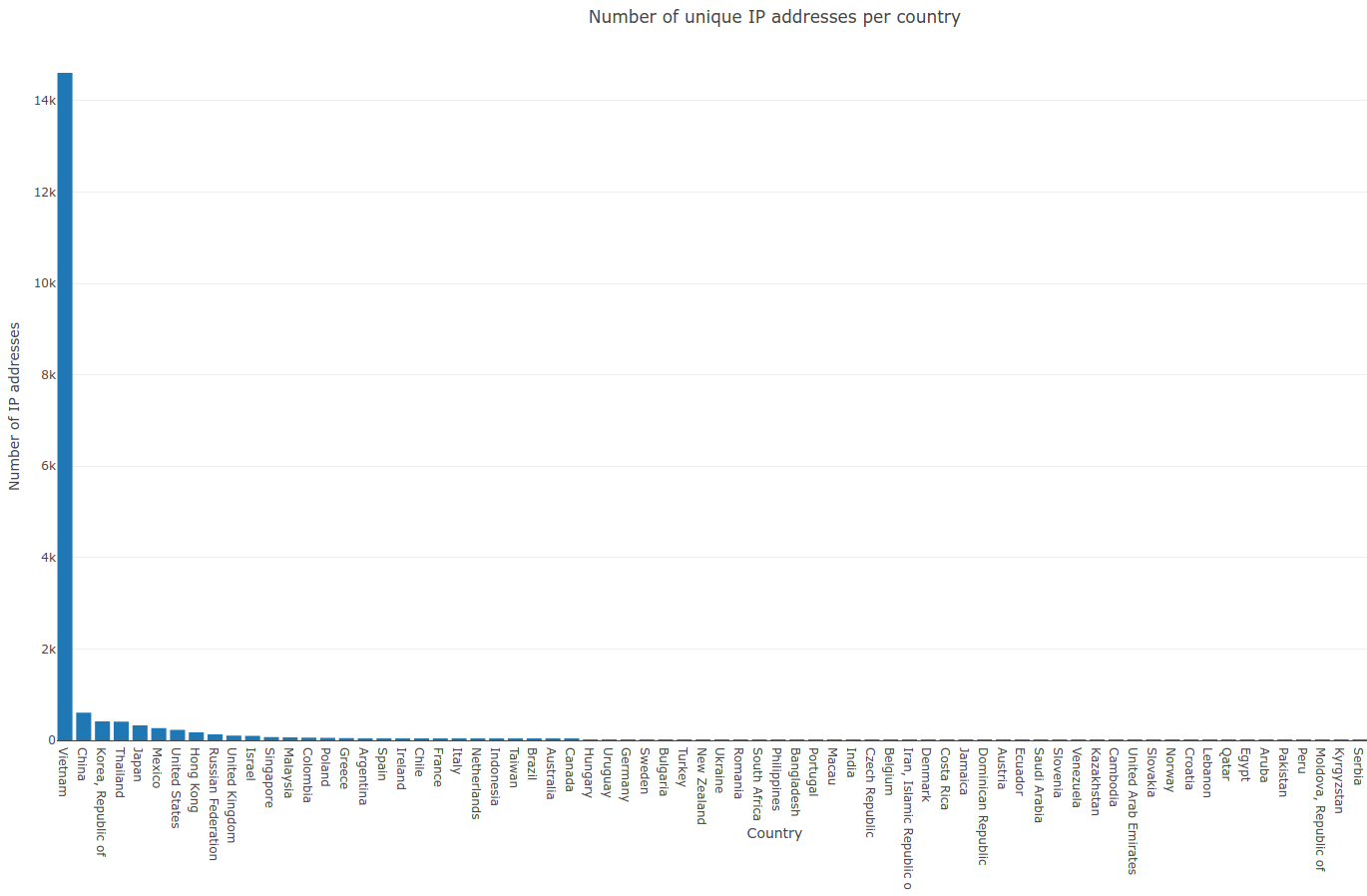 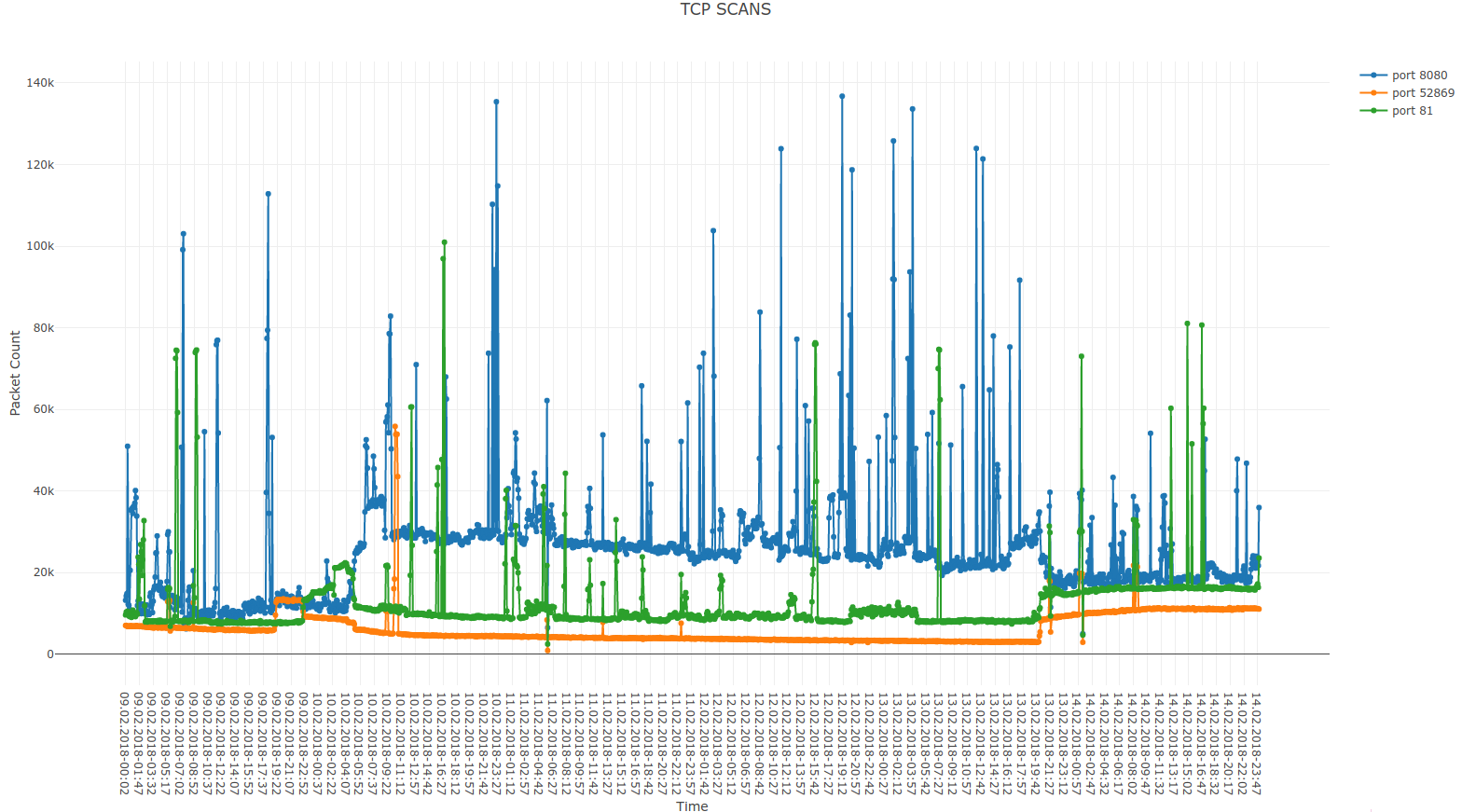 To sum up, we have estimated that Satori.Dasan variant has infected at least 25,000 devices. The main purpose of Satori is still unknown, thus security community should be on their guard. One thing is sure – people responsible for Satori are still looking for new infection vectors and they probably will not stop in the near future.